By Grabien Staff
Before he died as a result of injuries suffered at the hands of his North Korean captors, a University of Virginia student, Otto Warmbier, was a target of mockery among left-wing media outlets like Comedy Central, the Huffington Post, and Salon.

"This might be America’s biggest idiot frat boy: Meet the UVa student who thought he could pull a prank in North Korea" ran a headline from Salon.com

The publication even suggested Warmbier deserved his fate: 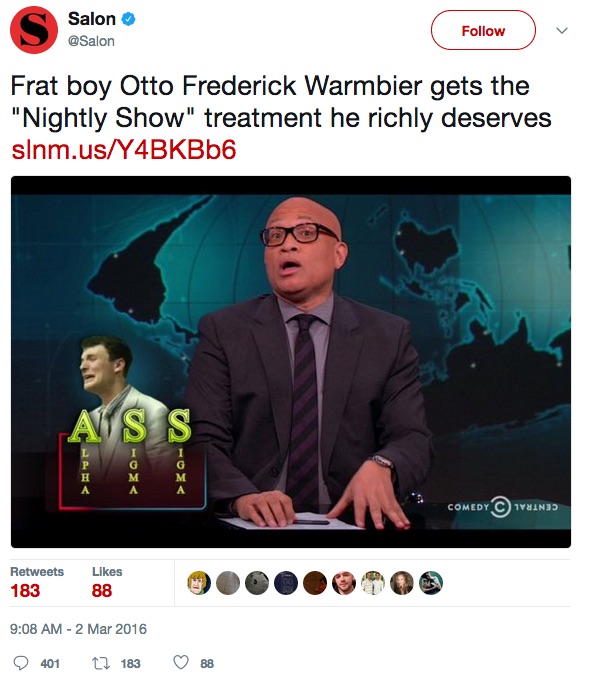 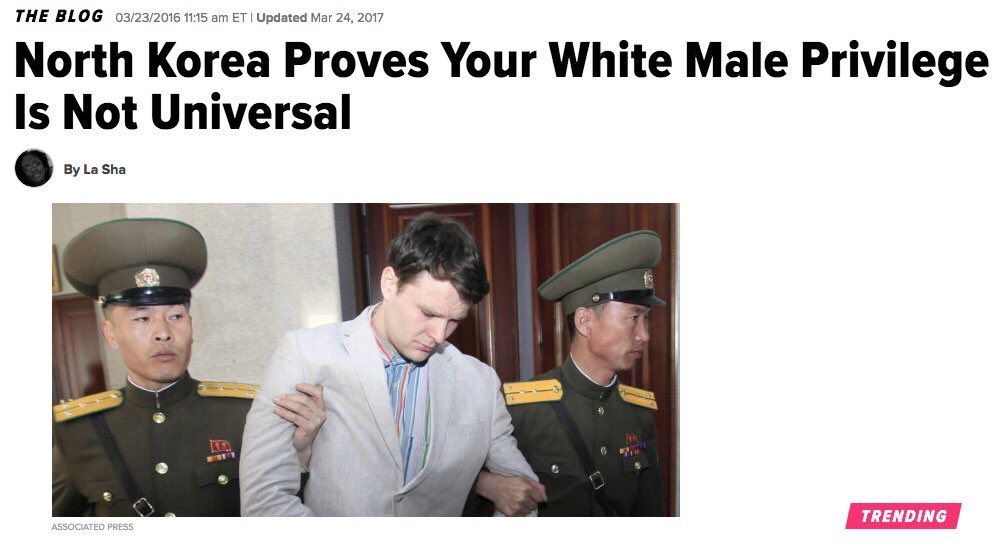 Many of these outlets derisively noted the fact that Warmbier was a member of a fraternity.

"As shocked as I am by the sentence handed down to Warmbier, I am even more shocked that a grown man, an American citizen, would not only voluntarily enter North Korea but also commit what’s been described a 'college-style prank.' That kind of reckless gall is an unfortunate side effect of being socialized first as a white boy, and then as a white man in this country," La Sha wrote in the Huffington Post. "Every economic, academic, legal and social system in this country has for more than three centuries functioned with the implicit purpose of ensuring that white men are the primary benefactors of all privilege. The kind of arrogance bred by that kind of conditioning is pathogenic, causing its host to develop a subconscious yet no less obnoxious perception that the rules do not apply to him, or at least that their application is negotiable."

Worse, because Warmbier's white, Sha suggested his kidnapping may contain some element of justice.

Coming from a country filled with citizens who lambaste black victims of state sanctioned violence by telling us that if we obey the law, we wouldn’t have to face the consequences, Warmbier should’ve listened. If he had obeyed North Korea’s laws, he would be home now. In fact, if he had heeded the U.S. Department of State’s strong advisement against travel to North Korea, he would be home right now. And if Eric Garner is to be blamed for his own death for selling loose cigarettes or if Sandra Bland is dead because she failed to signal when changing lanes, then Otto Warmbier is now facing a decade and a half of hard labor because he lacked both good judgment and respect for the national autonomy of a country which has made its hatred for and vendetta against America unequivocally clear.

... As I’ve said, living 15 years performing manual labor in North Korea is unimaginable, but so is going to a place I know I’m unwelcome and violating their laws. I’m a black woman though. The hopeless fear Warmbier is now experiencing is my daily reality living in a country where white men like him are willfully oblivious to my suffering even as they are complicit in maintaining the power structures which ensure their supremacy at my expense. He is now an outsider at the mercy of a government unfazed by his cries for help. I get it.

Comedy Central's Larry Wilmore likewise mocked Warmbier for his white race and membership in a fraternity.

“What were you expecting? Some Spring Break spot with a bunch of strip clubs?” Wilmore joked. “It’s just tough for me to have much sympathy for this guy and his crocodile tears.”

“So you have to commit an international crime to get into that clique?” Wilmore added. “If your hazing includes international crimes, you’ve got to read the fine print on your American frat bro warranty … it says, ‘Frat Bro Privilege not valid in totalitarian dystopias.'”

An on-screen graphic during the Wilmore segment suggested Warmbier was a member of Alpha Sigma Sigma ("ASS"). See his full segment above.