The performer also appeared to invoke the crucifix

In an already sex-charged Super Bowl half-time performance, JLo took it up a notch, rubbing her crotch area and then performing on a stripper pole.

The dance came during early into her four-song medley, while performing “Waiting for Tonight.” JLo slid across the stage, toward an awaiting camera, while moving her fingers across her crotch area. A stripper pole was then erected on stage, and JLo danced above her backup dancers.

At one point during the pole dance, JLo’s arms extended in what appeared to be a reference to the crucifix: 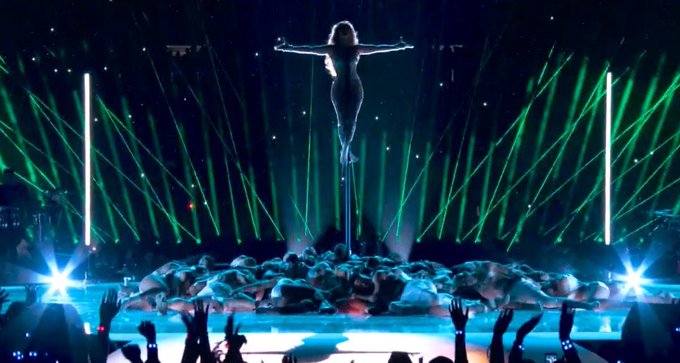 Comments about the sexualized nature of the Super Bowl performance began during Shakira’s opening act.

Fox News’ Raymond Arroyo tweeted: “My 16 year old just now: ‘The #Superbowl is the only time of the year when it is socially acceptable to watch half-naked women with your family.’ #PepsiHalftime #theseKidsDontLie”

Arroyo, who appears in a weekly culture segment on Fox News’ “The Ingraham Angle,” followed up: “We went from Ella Fitzgerald to J-Lo on a pole. And this is cultural growth? #PepsiHalftime”

The website Breitbart compiled the most sexualized moment from the half-time show in the montage below: