Many in the media are apparently so desperate to score points against President Trump they’re willing to fish up a phony scandal about how the commander in chief improperly feeding Japanese koi fish.

The fishy story began overnight Sunday, when CNN circulated a deceptively edited video that appeared to show Trump, who was feeding koi fish with his Japanese counterpart Shinzo Abe, simply dumping his box of fish food into the pond.

The apparent breach of fish-feeding protocol immediately went viral, as Trump was seen as too impatient to thoughtfully spoon the fish food into the pond, as Abe was doing.

Here's how CNN's edited the video:

Here is one of the many tweets CNN published: 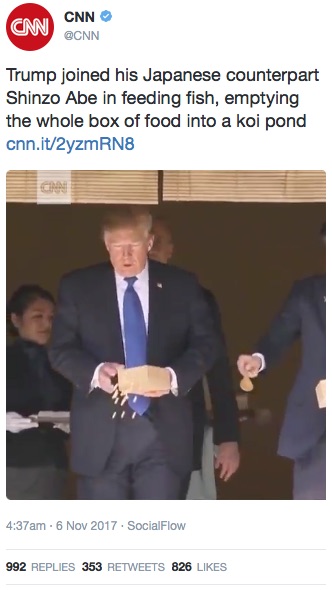 CNN also wrote up a news story about the fake fish story:

The Huffington Post's Yashar Ali was one of many journalists to circulate the false report, snidely tweeting that "Trump was supposed to feed the koi by the spoonful with PM Abe but quickly got impatient and dumped the whole box of food into the pond." 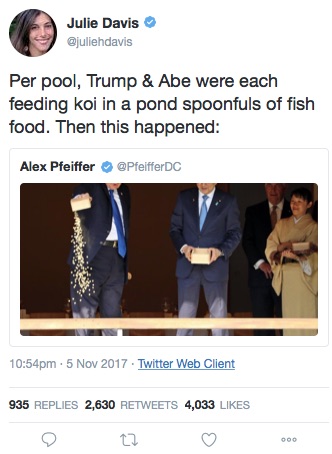 The only problem is that ... it's all untrue.

As the non-edited video below shows, both leaders casually spooned fish food to the koi; after doing so for approximately 30 seconds, Abe dumped the remainder of his box into the pond; Trump, following Abe's lead, then does the same: 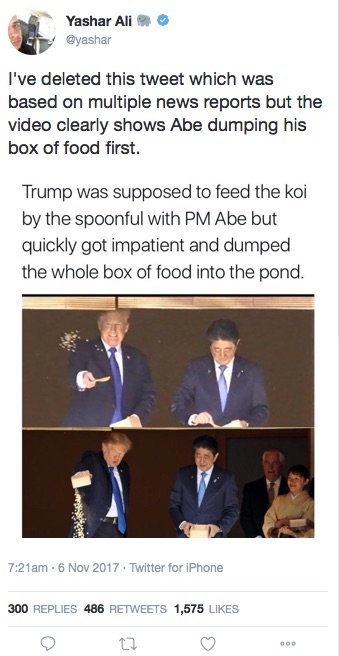 The other fake scandal concerns Trump apparently suggesting to Abe that Japan should build cars in the United States and create American jobs, rather than import them from Japan.

Take, for example, this sample treatment from Slate: 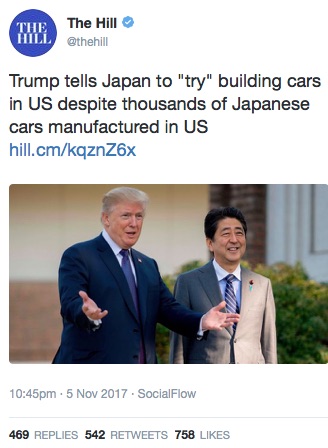 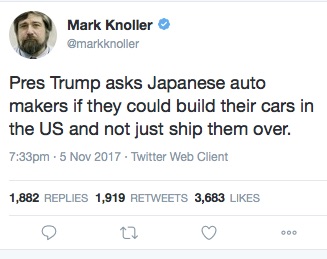 Again, the only problem with this story is that it's untrue.

After spreading uncorrected for almost 24, The Washington Post's Aaron Blake tweeted a debunking:

As the full quote makes clear, Trump not only is aware Japan manufactures cars in America, but he specifically thanks them for all of the jobs they're creating. "I also want to recognize the business leaders in the room whose confidence in the United States — they've been creating jobs — you have such confidence in the United States, and you've been creating jobs for our country for a long, long time. Several Japanese automobile industry firms have been really doing a job," Trump says.

He then thanks Toyota and Mazda specifically for a new plant they're building in the U.S.:

And we love it when you build cars — if you're a Japanese firm, we love it — try building your cars in the United States instead of shipping them over. Is that possible to ask? That's not rude. Is that rude? I don't think so. (Laughter.) If you could build them. But I must say, Toyota and Mazda — where are you? Are you here, anybody? Toyota? Mazda? I thought so. Oh, I thought that was you. That's big stuff. Congratulations. Come on, let me shake your hand. (Applause.) They're going to invest $1.6 billion in building a new manufacturing plant, which will create as many as 4,000 new jobs in the United States.

We're only one day into Trump's Asia trip, and the major media's already embarrassed itself twice. It's shaping up to be a long trip.