‘As a 16-year-old student who just went through this in your community with your friends, what would you say to the adults?’

Is CNN just giving student survivors of the Parkland mass shooting a voice?

Or exploiting them to attack Republicans on gun control?

Several students have granted interviews since the tragedy last week, but no station has paraded these emotionally traumatized kids on TV more than CNN.

CNN hosts are interviewing these students so frequently, many are becoming household names. But rather than asking generally for their thoughts on the shooting and how they’re channeling their grieving, these reporters appear specifically interested in how they're going to use this incident to convince Republicans to enact new gun control restrictions.

There are certainly many ways to approach an issue as complex as school shootings — the roles of mental health, school administrators, local and federal law enforcement, pharmaceutical drugs — yet CNN appears primarily focused on looking at this through the lens of gun control.

Tonight at 9 PM, CNN is even broadcasting a two-hour "town hall" forum with Parkland students titled, "Stand Up: The Students of Stoneman Douglas Demand Action."

CNN's Alisyn Camerota has been at the forefront of this trend. On Sunday, she interviewed Emma Gonzalez, asking questions that in a court of law would be described as "leading the witness."

Rather than focusing on the student's emotions, or the students whose lives were lost, or the overall experience for someone of Gonzalez's age, Camerota appeared mostly interested in scoring soundbites against Republicans and the National Rifle Association.

"So what do you say to the NRA?" Camerota asked Gonzalez.

"Disband, dismantle," the student replied. Camerota, seemingly unsatisfied, then asked another leading question, "I don’t have to tell you guys that they give millions of dollars to politicians. They have a very powerful tool. How do you expect politicians who need money to keep running for office to say no to the NRA?"

On Friday morning, Camerota asked another student, David Hogg, to address "lawmakers" and "the president." Hogg dutifully directed his message to the camera, "My message to lawmakers and Congress is, please take action. Ideas are great, ideas are wonderful and they help you get re-elected and everything. But what’s more important is actual action and pertinent action that results in saving thousands of children’s lives — please take action.” 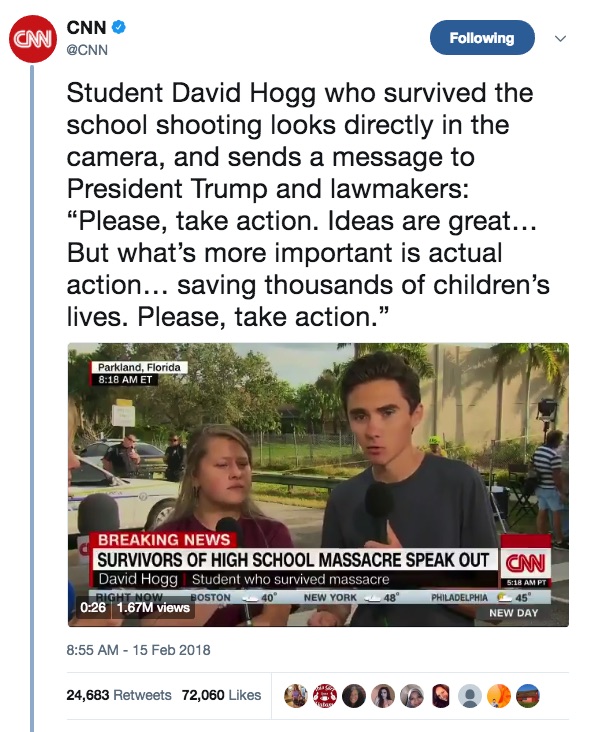 The next day, Camerota setup another interview with Hogg, telling him his last appearance was a big hit.

"Your interview yesterday got a lot of attention with us because you made this personal appeal," Camerota said. "You just looked at the camera and you said to everybody listening, we’re children. You’re adults. Figuring this out. Children are dying. Did you hear from any leaders? Did you hear from anybody in power after that yesterday?"

As Camerota seemed to already know, Hogg told her he hadn't heard from any elected leaders since his last CNN appearance. Camerota then upped the political ante, throwing to a clip of Sen. Marco Rubio suggesting no single law could prevent a tragedy like this, and asked Hogg to take on Rubio directly.

Camerota then kept at it, asking the student more politically charged questions:

— "You said thoughts and prayers only go so far. They’re cold comfort. What do you want President Trump to do?"

— "President Trump made some statements about this yesterday he spoke bit. He didn’t mention guns ..."

The host of Inside Politics, John King, interviewed a 16-year-old student named Lyliah Skinner, urging her to say something to the "adults" that are skeptical new gun control laws will prevent future mass shootings.

"So you’ll see whether it’s your governor — we’re about to talk to one of your senators — people in the town I work in, Washington, D.C., there is a debate about gun control, a debate about mental health," King began. "There are some people who will say there is nothing you can do to stop somebody if they want to kill, they’ll find a gun no matter the law. As a 16-year-old student who just went through this in your community with your friends, what would you say to the adults?”

On CNN's State of the Union Sunday, an entire group of Parkland students was assembled, and guest host Dana Bash asked them repeatedly about gun control. Here is every question Bash put toward these students:

— "We just heard from you at that rally, you are now part of a group called 'Never Again.' Do you think that you and your friends are going to finally do what it takes to make a difference on this issue?"

— "And Cameron, what is your message to the nation’s leaders after what you have been through?"

— "And David, you just heard your friend there talk about this March, in March next month, what exactly are you hoping will come out of that?"

— "Thank you all of you for your bravery and your just amazing ability to have presence of mind and to be able to speak truth to power in a way that a lot of grownups can’t do. I appreciate it."

Worse, CNN has clearly already located the students they trust to serve up the hottest anti-GOP/NRA soundbites. After all, some students have expressly come to the opposite conclusion.

A junior ROTC student named Colton Haab told Fox News' "Fox and Friends" that the coach who sacrificed his life to save his students could have saved many more lives had he been allowed to bring his gun on campus. Another student, Brandon Minoff, seemed to surprise Brian Williams when he deflected calls for new gun control laws: “Gun-wise, I don’t think there’s any way to prevent it. You outlaw guns, just creates higher demand for it. I think it has to do with mental health, though. If he’s been expelled three different times, from three different schools, I think he should be helped out.”

A survivor of the Columbine massacre member of Colorado's state legislature, Patrick Neville, is proposing students be allowed to conceal carry in schools. As of today, neither of these survivors have been invited to appear on CNN.