Vaclav Havel: The Forgotten History of the Political Dissident Who Founded the Czech Republic

Vaclav Havel was more than the founder of modern-day Czech Republic. He was a political dissident, a leader of resistance, a prisoner, a Presidential Medal of Freedom recipient, a hero who refused to bow down to Soviet-backed Communists, and eventual Czec 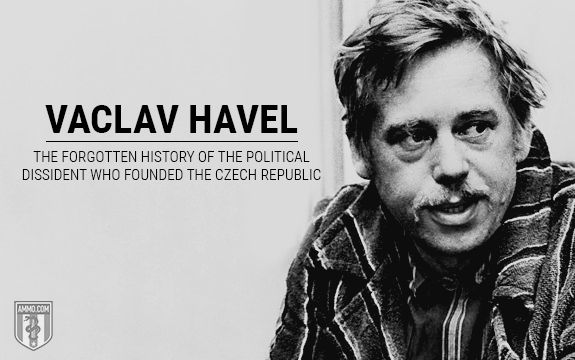 Our historical unsung heroes are generally impressive figures. But there are very few one might accurately call “cool.” This is an exception. Václav Havel, the founder of the modern-day Czech Republic (also known as Czechia) is undoubtedly cool by any definition of the word. A political dissident under the Soviet-backed regime, he served hard time in Communist prisons rather than bend the knee to their authority. His moral courage acted as a beacon of hope for the entire resistance movement behind the Iron Curtain.

Havel was born in Prague in 1936, to a wealthy and prominent family in then Czechoslovakia, a nation newly independent from the Austro-Hungarian Empire made up of the future Czechia and Slovakia. His paternal line was comprised of real estate developers, while his mother was the daughter of a famous diplomat and journalist. As one might imagine, this did not make his life easy after the Czechoslovakian Communist coup d’etat of 1948.

Indeed, the new Communist regime dictated his life path largely on the basis of his class background. He took gymnasium classes while working as an apprentice chemical lab assistant. Due to political and social reasons, none of the post-secondary humanities programs would accept him as a student. He was accepted into a prestigious economics program, but dropped out after two years. He entered into compulsory military service in 1957, and left in 1959.

Being a member of a formerly well-to-do family, most avenues in the arts and academia were closed off to Havel. However, it was his family’s deep roots in the cultural and intellectual community of Czechia that guided his final chapter in life as the leader of the resistance to Soviet and Communist domination over Czechoslovakia, and later the peaceful separation between Czechia and Slovakia.

From Playwright to Presidency

Official avenues into the arts were largely closed off to him, however, Havel was an innovative and enterprising young man. He took work as a stagehand to learn the craft of theater from behind the scenes while he took dramatic arts courses through the mail. He won international acclaim with his first full-length play, The Garden Party, presented as part of a series on the Theater of the Absurd. In 1968, his second play The Memorandum was featured at The Public Theater in New York, which further helped to solidify his reputation on the international scene.

1968 was also the year of the Prague Spring, a time of greater openness within Czechoslovakia, which had always been the Soviet satellite least under the thumb of the Soviet Union. However, at the end of the Prague Spring, tanks from five different Warsaw Pact nations (the Soviet Union, Bulgaria, East Germany, Poland and Hungary – Romania and Albania refused to participate) rolled into Czechoslovakia, putting an end to this period of liberalization. Havel’s plays were banned from being performed in the country and he was forbidden from traveling abroad, which meant that he could not see his own work being performed.

It was during the Prague Spring that Havel’s identity began to take on more of the character of political dissident than of artist. He was the voice of Radio Free Czechoslovakia during the early weeks of the Prague Spring. After the suppression of the Spring, he took a job in a brewery to make ends meet. He wrote plays about his experiences during this time that were later called “the Vaněk Plays” after the protagonist, who is essentially a stand-in for Havel.

These plays were distributed in samizdat (self-publishing used by dissidents in the Soviet bloc) form. It was during this period that he acquired a reputation as one of the leading dissidents of Czechoslovakia. This reputation skyrocketed with the publication of Charter 77, a manifesto published in response to the imprisonment of Czech rock band Plastic People of the Universe. The Charter attacked the government for failing to abide by its own nominal human rights laws. The document was meant to be presented to the assembly, but was destroyed. Possession of the document was a crime.

In 1979, he formed the Committee for the Defense of the Unjustly Prosecuted along with a number of other signatories of Charter 77. He was soon arrested after this, in what would be his longest stay in prison – May 1979 to April 1983. Letters to his wife written during this period were later published as Letters to Olga. Samuel Beckett wrote a short play during this time called Catastrophe that was dedicated to Havel in prison.

What was supposed to be a relatively uneventful student demonstration was suppressed by police, which led to massive protests throughout Czechoslovakia. The numbers quickly ballooned until half a million students were out on the streets, and the entire Communist government resigned in less than the span of a week. A few days later, the entire country went on strike. Less than two weeks after it began, the entire Communist apparatus had collapsed. Havel was elected President of Czechoslovakia on December 29, 1989. He was elected by the unanimous vote of the Federal Assembly.

At this time, he was the head of the Civic Forum, a short-lived political party based on Charter 77. When the first free elections since 1946 were held in Czechoslovakia, the political party and its Slovak equivalent, Public Against Violence, cleaned up – they commanded the largest share of the vote for any political party in a free election in history when counted together.

The new country suffered from increasing internal tensions between its Czech and Slovak halves. Despite receiving the most votes for president in the next election, Havel did not obtain the necessary majority because all of the Slovak deputies failed to vote for him. He resigned his presidency, rather than preside over the dissolution of the nation. After the Slovak Declaration of Independence, he stood for president of the new nation of the Czech Republic and was elected its first president.

The framers of the new Czech Constitution wanted to vest most of the power in the Prime Minister. However, because of the massive and weighty moral authority possessed by Havel, the presidency of Czechia quickly grew in power and scope. One example of his unofficial power was keeping the Communist Party of Bohemia and Moravia, the successor party to the Communist Party of Czechoslovakia, on the political fringes. Havel considered the party to be an unreconstructed Stalinist political party.

Havel tended to be even more popular internationally than he was in his home country. He was not afraid of making controversial statements, for example stating his belief that expelling the Sudeten Germans after the Second World War was a great moral crime. One of his first acts as president was to issue a general amnesty – to relieve the strain on the prison system, but also to release everyone who might have been falsely or wrongly imprisoned underneath the Communist regime. However, this led to a massive spike in the crime rate for the country, including a doubling of the murder rate.

Havel considered his two greatest accomplishments to be agitating for the end of the Warsaw Pact and the integration of Eastern European nations into an expanded version of NATO. He remained president of the Czech Republic until 2003.

The bulk of his life post-presidency was dedicated to research on the subject of human rights, but also securing his artistic and intellectual legacy. This included many trips to the United States, including a recorded conversation with then United States President Bill Clinton. He was voted the third-greatest Czech of all time, being bested in the number of votes only by King Charles IV of Bohemia and Tomáš Garrigue Masaryk, the first president of Czechoslovakia. He also returned to playwriting during his final years.

He passed away on December 18, 2011, at his country home in Hrádeček. At the time of his death, he had received numerous state awards, including the Presidential Medal of Freedom.

Václav Havel stands as an example of how one can succeed against all odds. At the time that he began actively resisting the Communist regime of Czechoslovakia, no one thought it was possible to win, perhaps not even Havel. But he stood his ground and refused to bend. Even when he was in jail, Havel was freer than many.

Vaclav Havel: The Forgotten History of the Political Dissident Who Founded the Czech Republic originally appeared in The Resistance Library at Ammo.com.