The 14 Dumbest Reactions to Trump Quitting the Paris Climate Accord [Updated!]

The Paris climate accord is a largely symbolic gesture that even supporters acknowledge lacks enforcement mechanisms and, even if successful, will have a statistically insignificant impact on the climate.

Reuters reports that U.S. carbon emissions will fall over the next decade — regardless of whether America remains in COP21 treaty.

Nevertheless, the news that Trump is officially withdrawing America from the accord has brought on a level of hyperbole that is almost ... anti-science in its sheer disproportionality.

Here are the 14 most unhinged reactions to Trump's decision thus far.

14. Democratic super-donor Tom Steyer — who as an investor in many green-tech companies is anything but a disinterested party — thundered that Trump is "committing a traitorous act of war against the American people."

13. Ben Rhodes, Obama's former deputy national security adviser, experienced a complete meltdown on Twitter in reaction to the news. "Shame on those in Trump WH who know the science is real and Paris is our last best chance. There is no trade off that is worth this cruelty," he tweeted. Cruelty? Really? "A Rose Garden celebration of a step that denies science and hurts children. History will note those who participated in this moral wreckage," he tweeted again. There were many more, but you get the idea.

12. Dan Rather, whose reputation for truth-telling is second to practically everyone, presumed to be able to read the president's mind, telling MSNBC's Lawrence O'Donnell that Trump is "mad, he has some rage, he's scared" and "he's lashing out in anger" toward Europeans. Again, Trump never said he was mad; this is simply Rather presuming to be able to read Trump's mind. Worse, Rather said the decision to leave the Paris deal shows Trump is the most "psychologically troubled ... since at least Richard Nixon."

11. John Kerry, one of the deal's leading negotiators, said Trump is not helping the "forgotten Americans" he pledged to elevate, but instead will give their kids asthma (perhaps as soon as this summer!).

10. Al Gore released a statement that included the bold claim that "Trump's decision is profoundly in conflict with what the majority of Americans want from our president" — this despite the fact that as a candidate Trump repeatedly promised to do exactly this and won soundly in November. 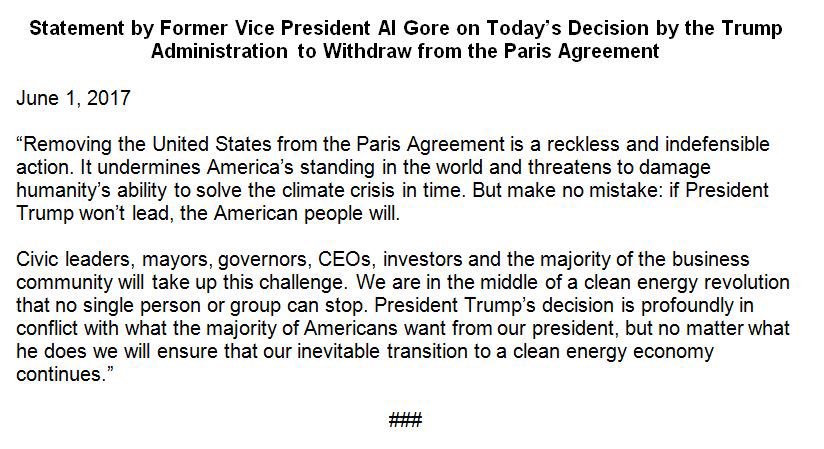 9. The ACLU, an organization ostensibly centered around civil rights, offered the bizarre claim that leaving the Paris agreement is "a massive step back for racial justice and an assault on communities of color across the U.S."

8. CNN's Fareed Zakaria upped the crazy a notch higher, telling Jake Tapper "this will be the day that the United States resigned as the leader of the free world."

7. Elon Musk, who runs three companies that all depend to some degree on the idea that carbon dioxide will destroy planet Earth, said he takes America's removal from this largely symbolic agreement so seriously that he's going to make up the difference and stop crisscrossing the world in a private jet. Just kidding, he said he's resigning his symbolic post on a symbolic presidential council. 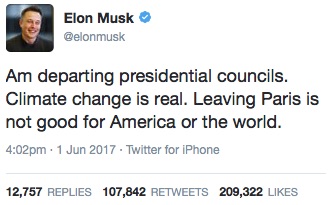 6. Barack Obama, breaking again with the tradition of erstwhile presidents refraining from attacking their successors, channeled his inner Miss Cleo, arguing he knows what the future holds, and Trump's decision means America now "joins a handful of nations that reject the future." (Obama's prophesy, for those wondering, foretells a "low-carbon" world that showers wealth upon fellow believers.)

4. John Kerry — yes, he appears twice in this list — also released a lengthy statement on Facebook, in which he offered the utterly-lacking-in-perspective take that Trump's decision "will rightly be remembered as one of the most shameful any president has made." Really? Worse than FDR locking up innocent Japanese Americans? Worse than President Adams outlawing criticism of his administration, and jailing critics? Worse than JFK's Bay of Pigs fiasco? Think before you Facebook, Mr. Kerry!

3. Serial fabricator/MSNBC anchor Brian Williams intoned that "on a sunny day in the Rose Garden," President Trump delivered a "dark speech," and then approvingly quoted an Obama official who likened Trump to Hugo Chavez.

2. Apparently of the opinion that Kathy Griffin pretending to behead Trump wasn't quite distasteful enough, an editorial cartoonist for the Australian Financial Review, David Rowe, likened Trump leaving the Paris agreement to ... beheading the entire planet. 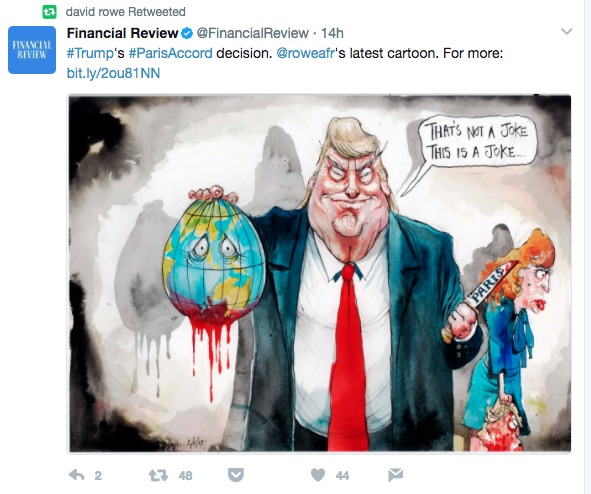 1. And New York's Daily News takes the cake. Trying to recapture the glory of its notorious "Ford to City: Drop Dead" headline from the 70s, tomorrow's front-page will appear thusly: 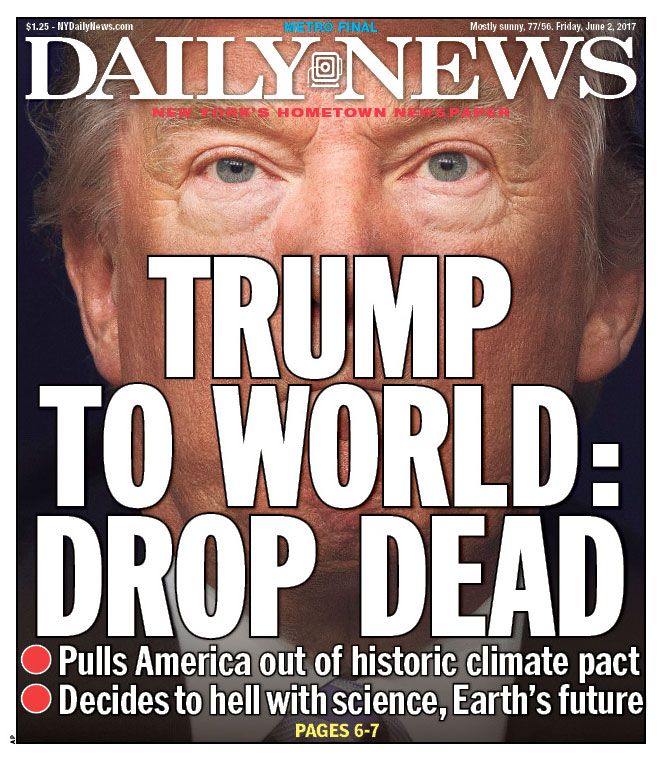 Editor's Note: This post will be updated as more responses come in. Stay tuned!